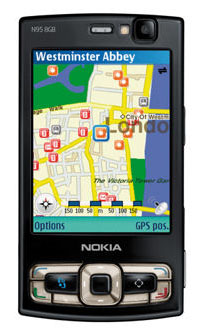 One of my favourite features of my Nokia N95 8GB is the GPS function. It has helped me on a few occasions, particularly when travelling somewhere I've never been before.

The Nokia Maps application is pretty good. It's a bit slow but it does a good job and I was able to load maps from all over the world onto it. Last night, I was checking where the Phuket Immigration Office was online and tried to find it on my phone so that I could bookmark it. Unfortunately, I could not find the location on Nokia Maps as the map of Phuket Town was incomplete with many smaller streets not being represented.

So I decided to check Google Maps via my phone (using the wifi option). Unlike viewing Google Maps on a laptop, Google asks you to download an installation file for your phone. After installing the file you can then use the application. In my opinion, the software works much better than Nokia Maps. It located the Phuket Immigration Office for me and quickly worked out the directions, distance and time it will take me to get there. Of course, Nokia Maps can do this as well but a lot of the map was missing and it could not find the Immigration Office.

Unfortunately, Google Maps requires a data connection of some kind. So when I travelled there today I could not follow the route it had calculated for me because I wasn't connected online. This would not be a major problem in the UK as I have a monthly contract and could connect via 3G. However, I am unable to do it in Thailand so the application was a little limited.

So which is better : Google Maps or Nokia Maps? For me, Google Maps is the best application. It works quicker and has more information about the area too. However, it requires a constant connection which is why I think it's very useful having Nokia Maps installed as a backup. You can download all the maps for free from Nokia so if you do not have a connection, you can still view the map of where you are.

In the next year or two we should see more mobile phones with GPS capabilities and we should hopefully see software developers use it in different ways. For example, Google recently launched Google Latitude, a service which lets you tell friends and family where you are. I tried it out today and it looks good. I personally don't feel the need to let people know where I am 24/7 but it could be very useful in certain situations.

For example, there are many times in the past where I have planned to go out with friends in Glasgow but at the last minute I have had to attend another party or event. If you and you're friends all signed into Latitude then it would make it much easier to catch up with them later on in the night. I'm sure parents would find this very useful for keeping tabs on their kids too.

I recommend checking out Google Latitude if your phone has GPS :)

I’m Off To Koh Samui