As someone who suffered from Osgood-Schlatter Disease, I am acutely aware that there is not enough good information about the problem on the internet. Therefore, I hope this overview of the issue will help those who suffer from the disease.

What is Osgood-Schlatter Disease?

Osgood-Schlatter Disease (OSD) is a condition which affects children from the age of 10 to around 14. It is caused by excess physical activity in teenagers who are experiencing a growth spurt, which is why it is sometimes referred to as Growing Pains.

The patella tendon (knee bone tendon) is pulled away from the Tibia (shin bone) due to the the person growing quickly and exercising too much. This causes inflammation and a tender lump to appear below the knee. The term disease is perhaps a bit misleading, it is better to think of OSD as an Overuse Injury.

The injury is more common in boys than girls, which is attributed to boys participating in more physical activity during this age. It is also common for people to get Osgood-Schlatters Disease in one leg, though many experience the problem in both legs.

The condition usually disappears in most teenagers after 12 to 24 months, which is when the bones become fully matured. Though a small percentage of people may experience problems with the condition throughout their life.

The level of severity depends on how physically active the child was during the growth spurt. For some, a few months rest is all that is needed, whilst others may require 1 or 2 years before they can exercise regularly again.

Like any condition, the earlier you spot Osgood-Schlatter Disease, the better. There are a variety of symptoms which will help indicate that a person is suffering from OSD.

Some of the symptoms include:

In the picture below, you can see an example of an Osgood-Schlatter disease lump on the left left (just below the knee).

First and foremost, the best treatment for someone who has been diagnosed with Osgood-Schlatter Disease is rest. It is vital that the bones are allowed to develop and reach maturity.

In severe cases, the patient may have their legs put in a cast in order to immobilise them. Some patients may be advised to use a knee brace instead.

Paracetamol, Ibuprofen, and other types of painkillers, may be recommended by a doctor to reduce pain and swelling around the knee. Ice packs can reduce swelling too and when returning back to physical activity, can be used before and after training to reduce the chances of swelling.

The patient should use some common sense when returning to physical activity. For example, if a certain activity causes knee pain, they should reduce their participation in that activity or stop altogether. They should also be pro-active and spend time strengthening and stretching their quadriceps, hamstrings, and calves. Be sure to ask your physiotherapist for advice on what to do and what not to do.

Personally, I use a patella strap whilst training. This reduces the pressure on the knee. The strap is sometimes advertised as a relief for Runners Knee or Jumpers Knee.

If you need a little more support, you may consider using a more stabilising knee brace.

The first thing you should do when you, or your child, has symptoms of Osgood-Schlatter disease, is visit your doctor. They will be able to tell you how severe the issue is and what steps should be taken to get better.

However, I believe it is very important for both the parents and the child to have a good understanding of the injury so that they do not make the injury worse.

Below is a list of good articles on the subject which I hope you will find useful :)

The videos below show you some good exercises you can do to help with OSD. 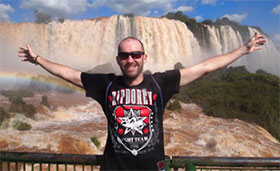 My name is Kevin Muldoon and this is my personal blog. I have suffered from Osgood-Schlatter Disease since I was around fourteen. I was, and still am, a very active person. Currently I exercise about five or six times a week.

I have had a few minor setbacks, though I do not have many problems with Osgood-Schlatter Disease nowadays as I have learned what aggravates the problem. I am not an expert on the disease and would advise anyone who is suffering from this problem, or looking for advice for a loved one, to speak to a doctor or a physiotherapist about it.

Through I do hope that you have found useful information about the disease on this page and hope I have pointed you in the direction of good websites and articles which talk about the disease. I would now like to to share my story.A story from someone who has lived with the problem for most of their life.

How I developed Osgood-Schlatter Disease

I was never a super athlete as a child, though I was fairly athletic. In a class of 40 or 50 boys at high school I was usually 2nd or 3rd in the 800 metres, trailing behind two friends who played football regularly (and I did not know at the time that I suffered from Asthma).

Unfortunately, the man above blessed me with two left feet so I never really got into football as much as my friends. My Dad was a swimming instructor when I was growing up (and later moved onto a managing position), therefore I had spent a lot of my time in the swimming baths since I was around three years old.

When I was fourteen, I started getting pains in my knees. I thought nothing of it, but after showing my Dad my legs he noticed the large protruding lumps under my knee bone. The doctor quickly recognised it as Osgood-Schlatter Disease.

I was an average sized kid growing up (I'm now 5″11), but in High School I didn't grow much during the first year or so of High School. However, when I was around fourteen, I went through a growth spurt, growing several inches in under six months. It was during this time that I was diagnosed with the disease. I was playing basketball several times a week, attempting to play football (badly) during school lunchtimes, and generally running around energetically like teenagers do.

The doctor quickly advised that I had to stop exercising for at least a year, which was obviously a horrible thing to hear when you are someone who loves sports.

So began my many trips to the hospital. I had a cast on one leg and was put on crutches for around six to eight weeks. When that cast was taken off, I had to build up the muscle quickly using strength exercises, as it would have to be strong to support the other leg. A short time later, my other leg was placed in a cast for six to eight weeks.

It was not as bad as it all sounds. It was frustrating not being able to exercise, but at least I got to leave class early to avoid the crowds. Plus I got to take a friend to help me with doors, so me and a friend could always leave class ten minutes early :)

After getting my casts off and having about a year off exercise, I slowly started to train again. However, I still didn't fully understood how it affected me. I did know that running made my knees hurt, so avoided running. I also knew that bumping the lump below my knee off a table would make me want to cry like a five year old because the pain was so severe. However, I still did not know what was the best way to exercise without causing more pain.

I went to University when I was seventeen. I was still fairly active, doing swimming cycling, rowing, and weight training. I never really had any problems with Osgood-Schlatter Disease during this time because I purposely avoided anything that caused me pain.

At twenty years old, I started attending a Taekwondo class. I had been watching Bruce Lee, Jackie Chan, and Chuck Norris, ever since I was a kid. In retrospect, I am surprised it took me so long to join a martial arts club.

I trained for about a year or so in Taekwondo and loved it. Unfortunately, I had to stop training as my knees were getting sore. Martial arts was not the cause of this. At the time, I was trying to get my fitness up and, thinking my legs were now better, I was running on the running machine (which is terrible for your knees).

So I went back to Physiotherapy for a few months. I had been told when I was a teenager that when I was 21 and had stopped growing, they could operate and get me back to 100%. When I told the Doctor this when I was 21 he laughed, suggesting that it was a crazy notion and stating that “Operating would only make things worse”. I was not amused amused.

A year or two later I went back to Taekwondo and continued to train for another 10 years. I have learned how to deal with the condition. I do lots of stretching and try and make sure my quads and hamstrings are strong.

I do still find certain things painful and I know I always will. For example, I find it very painful to kneel down on the floor with my knees when doing certain stretches as I learn over and put pressure on the lumps below my knee, which are sensitive to this day.

I also find kneeling down or squatting down to be painful. If I do, I need to stand up after ten or twenty seconds because of the pain. In training, I try and avoid burpees and squat thrusts as I find these painful too. So in class, when others do those exercises, I simply do sit-ups or something else. I use a patella strap during training too. This is a small strap which wraps around the lump on your knee, which reduces stress around the knee area.

The general idea is to avoid any activity which provokes the condition and causes you pain. Once you learn to do that, you will forget you even have it.

Here are some pictures of my legs, which show you how the lumps on my knees look today. The bump on my left knee is visible but it is not as prominent as the right.

Pictures of My Left Leg

The bump below my right knee is quite large and protrudes out from the leg itself.

Pictures of My Right Leg